Wildlife spotting in the Hebrides 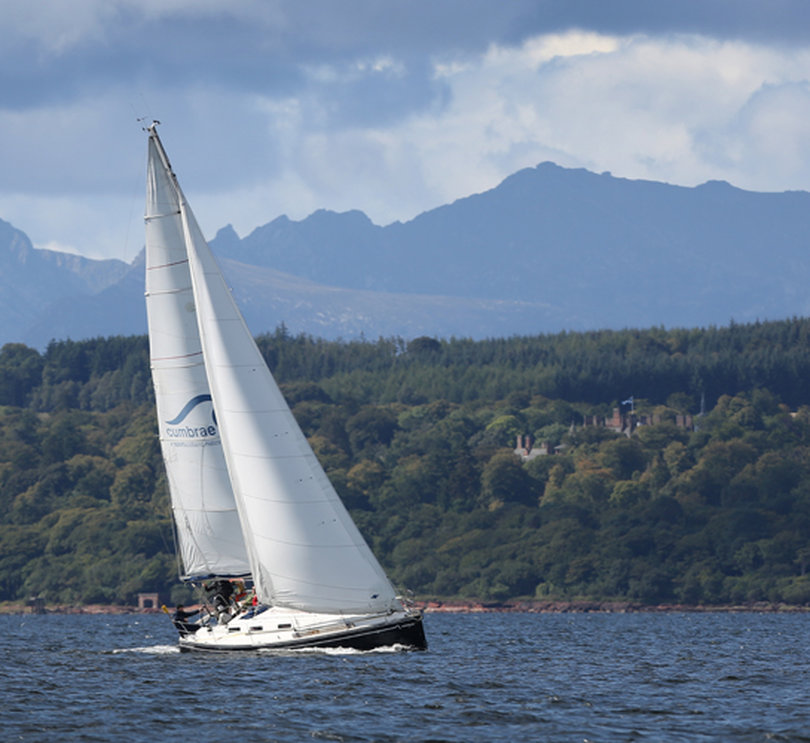 If you have ever wondered what a Cumbrae cruising adventure course is like this extract logged by our Chief Instructor last summer on board our yacht, Somerled, may provide you with some inspiration for this year and a flavour of what can be expected. It’s not all hard sailing, intensive training and certificates!

“After a couple of hours sailing we were closing the Northern tip of the island of Eigg, the wind and boat speed had dropped, and the seas were calm, but on this very relaxing first evening, as Instructor and crew all got to know each other, no one wanted to admit it may have been time to start the engine.

Ahead, but well clear of the steep headland, breaking waves and turbulent water could be seen in front of us. Odd, we thought to ourselves. A quick check showed no reefs or off lying dangers on the chart. Odder still that that those on deck confirmed that the breaking waves were moving…. and towards us. Suddenly it became clear what we were witnessing. It was hard to count but our first estimate of ten was quickly revised, at least twenty, fifty more like, more again! Dolphins everywhere. We watched in awe as these sleek and playful mammals put on displays of leaping, jumping, twisting and tail slapping. An entire school, in vast number and different sizes, swam around, across and under us. A few played with our bow wave but most just swam, leaping and playing on their course northward. After 20 minutes of sheer awe at the sight of what seemed like hundreds of dolphins they passed and it was all over. As a sheer spectacle and life experience for all on board it was both amazing and humbling.

The following day we slipped out of the southern anchorage on the Isle of Muck. After hoisting our sails to catch the gentle north-westerly breeze we set our course for Ardnamurchan. Everyone staring and straining in expectation of sighting more inquisitive dolphins. We had covered less than half a mile before the shout came from the crew. Less than two cables directly ahead the black rounded back and small dorsal fin of a pilot whale and traveling beside it that of a much smaller calf could be seen. As these first two submerged, just further to the left another two broke the surface showing their long black rounded backs then off to the right another three. Not the playful jumping and showing off we had seen the day before, but a far more elegant and stately procession of gentle giants. We estimated at least ten whales each gently breaking the surface, exhaling with an audible cloud of fine spray before catching a breath, arching their backs and slipping gently back below the surface. Judging their direction of travel, we gently sailed around them providing them a clear onward passage we watched them into the distance as we continued south on what was turning out to be a great sailing adventure.”

National Centre Cumbrae provides yacht cruises for those wanting an experience of a lifetime, you might even be lucky enough to meet a few dolphins! We are running our 5 for 4 offer on our cruises so if you are able to get a group together then you can take advantage of this when you come onboard.