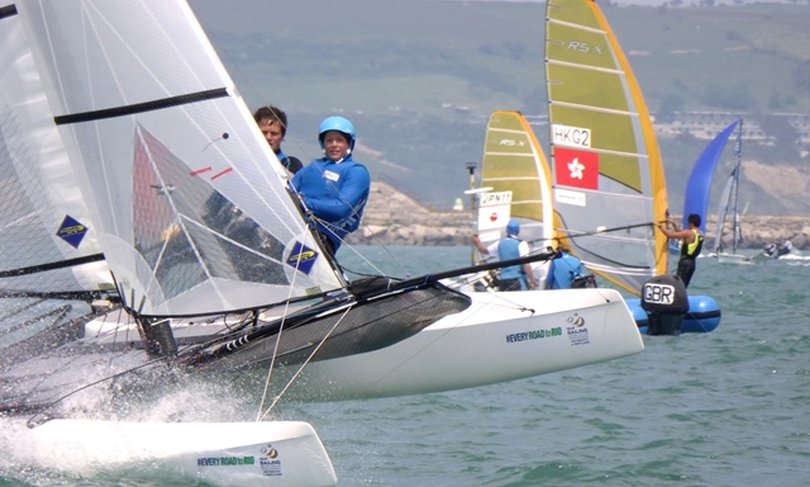 The ISAF Sailing World Cup series travels around the world showcasing the best talent in Olympic and Paralympic sailing. With the circuit of events already having visited Melbourne Australia, Miami USA and Heyres in France, it was time in June for a UK the stopover in Weymouth, home of the 2012 Olympic sailing. The World Cup Series follows a new format that features reduced entries and a qualification process for sailors, the entrants in each class are the best of the best from around the world. Hosting 10 Olympic classes, three Paralympic Classes the series also invited Kiteboard racing to Weymouth.

Experience in Weymouth is something the staff at sportscotlands National Centre Cumbrae, The Scottish Sailing Institute (SSI) and the Largs SC volunteers are not short of. Cumbrae Chief Instructor, David Frame appointed as the World Cup Event Safety Officer travelled to Weymouth earlier than most to deliver the RYA 2 day National Mark Laying Seminar ahead of the main event. Attending the National seminar were Cumbrae’s Tom Thurlow the SSI’s Stuart White and Largs Sailing Club’s Andrew Corlett amongst others. Training immediately prior to the World Cup event certainly focusses the mind, adds relevance to teaching, and creates a sense of purpose. All of the seminar candidates stayed on to work at the World Cup.

By the time the event itself started a large contingent of Scottish expertise in race management and safety was in place to help make the event run smoothly From National Centre Cumbrae, Andy Gibb picked up his previous Olympic “roving role” as Deputy Safety Officer. RYA Scotland’s Matt Toynbee moved up to Senior Mark layer on the Finn and Nacra course and promoted to the same senior role on the Paralympic course was Largs Sailing club’s Alastair Leicester.

With over 500 sailors and 160 race management officials on the water at peak times it was always going to be busy keeping the event running smoothly. In at the deep end; six National Race Officers stepped up onto the International stage for the first time including the SSI’s David Kent. The 2012 Olympic Race Officers, now mentoring the next generation, took a back seat to allow new UK talent to be brought forward. As Race Officer for the 470 fleet David had recruited a large part of his volunteer team from the members of Largs Sailing club.

Beach Master is a crucial role at any event, providing the interface between the on-water and off-water teams, controlling the launch procedure and logging competitors on and off the water. Facing the challenge of 500 sailors accessing the waters off Weymouth was the SSI’s Ewan Macpherson. Experienced in dealing with fleets at Largs, Ewan definitely experienced a step up in level of event coordinating 500 sailors over 11 different classes launching from three slips not to mention controlling the vast expanse of the dinghy park in Weymouth.

As the Weymouth and Portland National Sailing (WPNSA) celebrated its 10th Birthday at the end of the week with a party there was a lot of familiar Scottish faces in to be seen; including Race Officers, Assistant Race Officers, Safety Boat Drivers and Crew, Senior Mark Layers and Mark Layers, Committee Boat team members, Pin End Committee Boat teams, Finishing AROs, Bridge Radio Operators and Event Safety personnel
.It is very positive and encouraging that Scotland can offer this amount of expertise and make a significant contribution to a global sailing event. At a more personal level it was very encouraging to see that many individuals created their own opportunities stretching themselves and broadening their experiences on a World stage. Inevitably they will bring these experiences back home which can only be to the benefit of Scottish sailing as a whole.

From Weymouth the event moves in September to Quingdao, the 2008 Olympic waters in China before the November final in Abu Dhabi UAE. All these venues combine to ensure this World Cup Series is a truly global regatta.