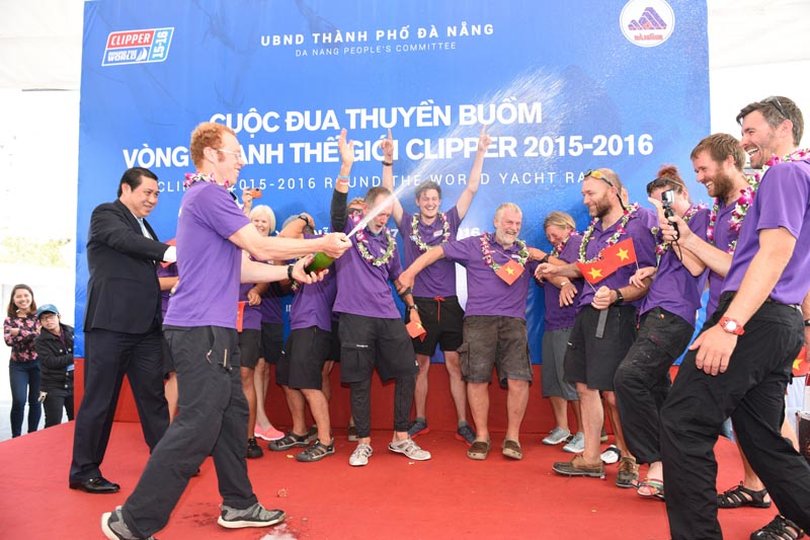 In August 2015, Daniel Smith, a Senior Yachting and Watersports Instructor for sportscotland Cumbrae set off on a 40,000 nautical mile circumnavigation of the planet as a Skipper in the Clipper Round the World Yacht Race. Leading a crew of amateur sailors on board one of twelve 70 foot matched racing yachts, Daniel and his team on the Northern Irish sponsored entry Derry~Londonderry~Doire have just celebrated their first race win!

The story behind ‘the win’

Following a challenging 27 day race of endurance from Airlie Beach, Australia, in which crew faced a vast range of weather conditions, Derry~Londonderry~Doire arrived victorious to a massive crowd of waiting spectators and media in Da Nang, Vietnam today, marking the end of Race 7, The Da Nang New Discovery of Asia Race.

The win marks the Northern Irish entry’s long-awaited first victory of the 14-stage Clipper 2015-16 Round the World Yacht Race, the only race of its kind that exists for amateur sailors. Stepping off the yacht at the Han River Port to a special Vietnamese arrival ceremony, which included lines of drummers, flag bearers and special Vietnamese wreaths, all conducted in front of a hugescrum of national media, Skipper Daniel Smith proclaimed:

“It feels fantastic to finally be standing on the top of the podium, and this has been an especially huge win. It was a really demanding race, both mentally and physically.

“We led this race from the early stages and all the crew worked tirelessly on board to firstly defend, then extend our lead, and finally defend it again over the rest of the fleet. We were constantly looking over our shoulder as the eleven teams behind pushed hard to try and catch us. The competition has been really hard to beat, but now that it is over and we are finally standing here in Da Nang as the winners, it feels absolutely brilliant and we’re all very happy to be celebrating the result of our hard work.”

From a fast, downwind sprint in scorching 40+ degree heat as teams headed north from Australia, out of the Doldrums, through the tropics and across the Equator line for the second and final time; to winds that gusted over 50 knots in lumpy swells, plus uncomfortable upwind conditions and then dying winds in the final stages; the race to Vietnam really threw it all at the amateur Clipper Race crew.

On top of the twelve points awarded for a first place finish, Derry~Londonderry~Doire also won the Ocean Sprint and were the second team through the Scoring Gate, so collect a massive 16 points in total. Sitting in third place in the overall standings,Skipper Daniel added confidently:

“There will be some more great results to come from Derry~Londonderry~Doire over the coming races so watch this space.”

Da Nang is hosting the Clipper Round the World Yacht Race for the first time. Arriving in the only South East Asian stopover of the 2015-16 race, the amateur crew have now raced more than half way of their 40,000 mile, eleven month-long circumnavigation. Along the way the crew has already visited Rio de Janeiro, Cape Town, Albany (Western Australia), Sydney and Airlie Beach (Queensland).

More than 220 international Clipper Race Crew, along with friends and family, will stay in the city over the next ten days for a vibrant stopover until Race 8, to Qingdao, departs on February 27.

Everyone back home at sportscotland Cumbrae are waiting eagerly to see how race 8 unfolds and wish Dan and his team all the best!

(To see the overall Clipper 2015-16 Race table go to http://clipperroundtheworld.com/race/standings)