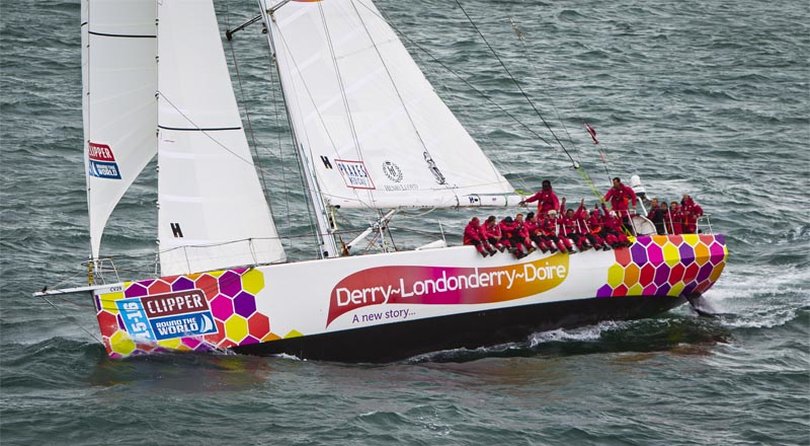 Excitement is building at Cumbrae as we eagerly await the start of The Clipper Round the World Race, starting Sunday 30th August. We have a real vested interest in the race this year as our very own Dan Smith (one of the Centre’s instructors) is skippering the N. Ireland boat! A huge challenge that we know he’ll ‘pull off’ with flying colours!

To give you a ‘feel’ for what this year’s Clipper Race entails, here are some stats:

Somehow Daniel managed to find a spare minute to update us on how the final preparations were shaping up so have a look at his update below. It gives you a great ‘behind the scenes’ insight into such a global event!

Preparation for Clipper Race 15-16, by Daniel Smith, Cumbrae Instructor and Skipper of ‘Derry~Londonderry~Doire’

Since leaving Cumbrae on my year long career break and becoming a Clipper 2015-16 Round the World Yacht Race Skipper I have been really busy. I packed my life up into my car, got my house rented out and moved into a flat in Gosport, Hampshire, where the 12-strong fleet of Clipper 70s, the yachts we are racing round the world, were berthed.

My calendar was full from the beginning: running training courses and familiarising myself with the racing yachts as well.

In April I met most of my crew for thefirst time at Crew Allocation. This was a huge event where over 400 of the 700 crew turned up at the Portsmouth Guildhall to find out which Skipper would be leading their team around the world, and who their fellow crew mates would be. The crew is made up of amateur sailors from 44 countries and from all walks of life: doctors, teachers, housewives, crane drivers and we even have a rose grower from Columbia on one of the yachts. Once the teams were announced I had 4 hours that afternoon to brief my crew and discuss how we are going to run our campaign.

May was an exciting month with the announcement of my Team Sponsor: Derry~Londonderry~Doire. Up until then we had been known simply as Team Daniel so it was great to be given an official name and to be the skipper of the Northern Irish city for me, was exciting. We managed to get the majority of the team over to Derry-Londonderry for our team building weekend in June. By this stage roles had been assigned on the boat and organisation was underway. Things were starting to come together. We spent those couple of days getting to know the city we will be representing around the world and experiencing the famous hospitality and warm welcome on offer – from breakfast in the Mayor’s chamber to cooking lessons from a local chef, and maybe even the odd pint of the ‘Black Stuff’. The local crew had a great time showing off their home town, while for those of us from further afield it established a real connection with our Home Port and city we will be sailing into next July.

A couple of weeks later brought the start of the Level 4 training weeks – for all of the crew this is the final step of their training before Race Start. This was the first opportunity for all of the Skippers to sail with the crew on their own teams instead of a mixture of crew from across all of the boats. So it was the first chance I had to work with mycrew and get them used to the way we wanted the boat to run. Although it was still a training course, we also got our first offshore racing practice and I’m pleased that we managed to get good results.

The Level 4 sessions finished by mid-August and all of sudden it was time for the boat preparation to begin. We had all standing rigging to replace, 11 sails to swap and all gear to be serviced. We also had to start the process of victualling. This involves buying food and stores for 22 people to sail across the Atlantic Ocean. How many tea bags would we need? How many baby wipes per person per day? Food is such an important tool on board and it is a difficult and delicate process getting the balance right in terms of nutrition, energy, variety and weight.

After ten days of prep, we waved goodbye to Gosport and delivered the fleet up to St Katharine Docks in London for the Race Start on Sunday 30 August. Derry~Londonderry~Doire led the sail up the Thames with the 11 other Clipper Race yachts following us into the marina which is tucked in behind Tower Bridge. Here we are making our final preparation, the Race Village is in full swing, excitement is building and we can’t wait to get going. Next stop Rio!