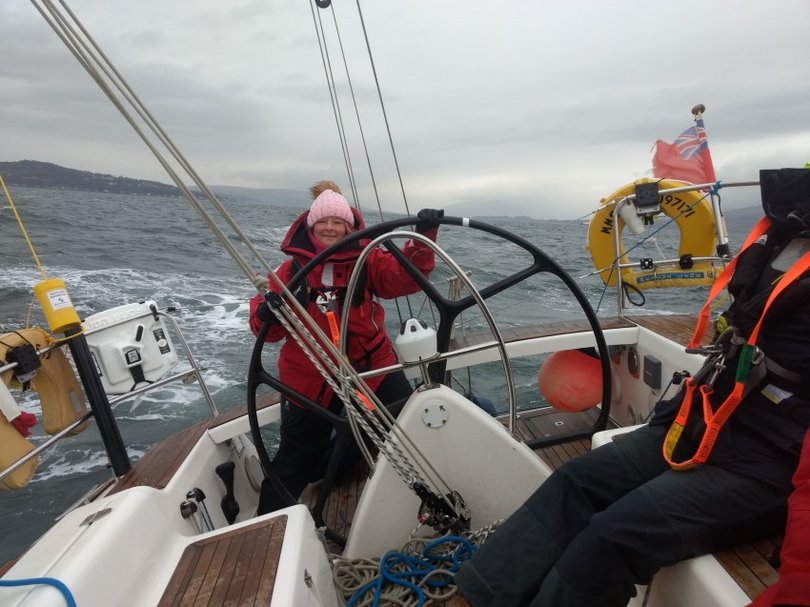 Katrina Seator is an instructor here at National Watersports Centre Cumbrae. She recently joined the crew on board one of the centre’s yachts for a Coastal Skipper course in challenging weather conditions. Here she writes her account of the week.

At 19.30 I met up with our skipper Stuart and the rest of the crew. We had a look around the yacht to get familiar with our surroundings was and following a safety talk we headed to bed, or should I say bunk!

I got up at 7.30am and made breakfast for everyone. We had a look at the weather forecast and the charts and made a rough plan for our week ahead. We decided to go to Campbeltown and made a passage plan including pilotage. We motored out of Largs Yacht Haven and got the sails up. The wind was very light so we changed the head sail from No. 3 to the Genoa, which is larger sail than what we had been using. We motored a lot of the way, it was partly sunny and we had lunch on deck as we cruised along. We practiced a few Man Overboard drills along the way and we arrived in Campbeltown late afternoon and watched the sun set over Davaar Island which was a stunning sight on our first night. Whilst dinner was cooking we practiced manoeuvring in confined spaces and berthing alongside different pontoons both bow and stern. We decided we were going to go south to Sanda Island the next morning so I was asked to make a passage plan as I had never been there before. There is a lot of tidal movement around the island so I had to take this in to consideration when deciding what time to depart.

Early in the morning whilst I finished my pilotage for Sanda Island down below, the others went up on deck and practiced some blind navigation, sailing of a pontoon and finding a spot depth. As we departed Campbeltown we had a good combination of sun, wind and tide all the way to Sanda Island. I had to keep a close eye on the time as we only had a short window to arrive at a favourable state of tide. We arrived at 13.30 as predicted and dropped the anchor in a gorgeous little bay. It was very scenic and sunny and we considered going for a swim, however the cold Scottish breeze convinced us otherwise! We agreed we would have some rest and complete a night sail to Loch Ranza. We worked together on a passage plan and took advantage of the tides by leaving just before dark. As we headed up the Kilbrannan Sound we decided to increase our night passage to 40 miles and go all the way to Tarbert as we had a maintenance issue that could be fixed easier in a harbour than on a mooring buoy in Loch Ranza. By the time we got to Carradale I found myself alone on deck enjoying the peace and quiet as the crew went down below to rest and warm up. I helmed the yacht all the way to Tarbert. I found it both exhilarating and calming sailing in the dark, I loved it. We arrived in Tarbert just after 1am and went straight to bed.

We stayed in bed slightly longer this morning due to our late arrival the night before but we were greeted by a howling wind. We decided to do a shorter journey to Port Bannantyne due to the adverse weather so we did all the chart work before heading out to the wind and rain. We departed Tarbert and put up our storm jib, luckily the wind decreased so we changed back to the Genoa. We beat to windward for hours with the wind and rain hitting us in the face before reaching calm water as we entered the West Kyle of Bute. We sailed through the Burnt Islands and down the East Kyle and arrived in Port Bannatyne just before dark. We had dinner and decided we would head to Helensburgh the next day to do manoeuvring and berthing practice. We went to bed but it was hard to sleep with the wind howling and the rain battering down on the boat despite a tiring day facing it!

We woke up to force 7 winds and white horses all around. The waves were crashing over the marina wall. None of us were very enthusiastic about heading out to sea so we had nice warm showers and bacon rolls and were very happy when skipper Stuart decided we should do theory inside for the morning! We learned about diesel engines and how to check them and we looked at different weather forecasts and how to predict the weather ourselves. By lunch the wind had decreased to a force 6 so we set sail in to the big waves. Our plan was to go to Kip Marina so I did a quick pilotage plan. However once underway we decided, by way of a group vote, due to the wind strength and direction we would go back to Largs. It was very windy and wavy and the sailing was really exciting despite it’s challenges! Once there we practiced Man Overboard under power and sail and berthing in the marina. Both of which were quite challenging in the wind but it was really good to know that we could achieve it in those conditions. We berthed up for the night just before dark and whilst we waited for dinner to cook we had a chat about cold water shock and helicopter rescues.

We woke up to force 8 winds whistling through the marina. We had breakfast then went for a walk to the marina wall to check the sea state. There were white horses and you could actually see the gusts of wind blowing across the water. We discussed the conditions and what we wanted to achieve and decided to head out and practice picking up mooring buoys under sail. Once out it wasn’t as bad as it seemed and we really enjoyed practicing the skills in such challenging conditions. We stopped for lunch, had individual debriefs whilst we cleaned the yacht and were over the moon to find out we had all passed!

Skipper Stuart and the rest of the crew were very skilled sailors and I had an amazing week on the yacht with them despite the challenging weather!

If, like Katrina and crew, you are keen to complete your Coastal Skipper course then you can check out our course dates on the website at nationalcentrecumbrae.org.uk/courses