David is the Chief Instructor at Cumbrae and heads up a highly qualified and experienced team of enthusiastic Instructors and staff who collectively deliver the most substantial watersports training programme in Scotland if not the UK. As a professional P.E. Teacher and post graduate of Glasgow University's Business School he both manages and delivers to the highest levels at the National Centre.

He works closely with RYA Scotland in the areas of Coach Development and sits on their Performance Committee. At an RYA UK level he was involved for 6 years on the Race Management Committee and was a member of their Race Officials appointments panel. Through his work with the Scottish Sailing Institute he has considerable experience on the organising committees for many of the World and European Championships hosted in Scotland. Having trained over fifty of the National Technical Officers (NTO’s) for the London Olympic Games he held a senior role at Weymouth during the 2012 Olympics.

With an International portfolio and technical expertise, David has supported and provided training for International events in Australia, Ireland, Norway and Oman. At the Royal Hong Kong Yacht Club he played a lead role in setting them up as the first RYA recognised powerboat training centre in China. In Spain he worked with the Race Management team in their preparations for the 2014 Volvo Ocean Race. As part of the 2014 Commonwealth Games celebrations he led the largest Flotilla ever, over 250 boats, up the River Clyde to Glasgow. He led a UK team of UK officials supporting the delivery of the America's Cup World Series in Portsmouth and took a team of 8 officials to Abu Dhabi, supporting ISAF in the deliver of the Sailing world Cup Final (2015).

Prior to working for Cumbrae he was appointed by RYA Scotland as the National Racing Coach and managed the delivery of the Scottish Sailing Squad programme, both regionally and nationally, delivering training programmes to over 200 sailors. Professionally, before turning to work on the water, he was Deputy Principal at Castle Toward, a large Local Education Authority run residential outdoor centre, where he was first employed as an Instructor. With education spending cuts looming, he played a key role in negotiating the formation of a private trust company and the production of a viable business plan that secured the future of the centre at the time.

He trained at both Jordanhill College (Scottish School of Physical Education) and Loughborough University which gave him a solid grounding in sports education. After graduating as a teacher of Physical Education he spent several years teaching the P.E. curriculum up to GCSE level in a large Community College in Leicester. He became an assistant year head and ran extra curricular classes and after school teams.

Top Tips; I always remind powerboat drivers that one of the things you never hear a power boat driver say is, “Oh no,….... I was going too slow” ! 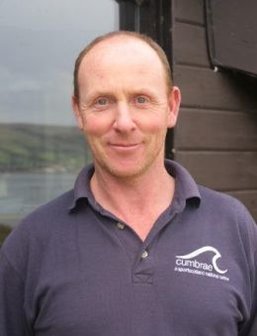