Calum was inspired by his uncle ‘Diesel’ Dave Coles who represented Canada in C1 (Canoe), and vividly remembers watching him compete in the 1986 world championships. Sharing his uncle's infectious quest for adventure, Calum started kayaking at the age of 10 and made his first open water crossing to the Isle of Arran with Diesel Dave at the age of 13. This passion for adventure and for pushing oneself remains today.

Calum describes himself as “an optimistic, energetic and dedicated father of 4, (as well as an accomplished Kayaker, Sailor & Ocean Rower!).

He recently completed an MSc from Stirling University, obtaining an award for the best Coaching Project in his year - examining the current Sea Kayak Safety Awards on Offer in the UK. More recently Calum was awarded British Canoeing's Coaching Diploma - the highest coaching award in the UK. Working for sportscotland at Cumbrae allows him to share his expertise in Leadership, Seamanship and Navigation, be it on a yacht or in a kayak.

“I have been lucky enough to travel the world with my kayak, yet for me very little beats sitting in my kayak or yacht watching an Atlantic sunset on the West Coast of Scotland!” 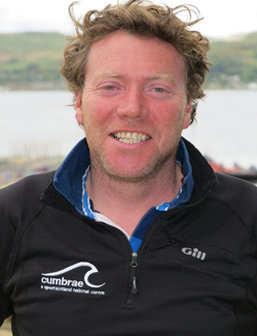