Angus started sailing at a young age at the local club at Plockton in a Mirror dinghy. Windsurfing and yacht cruising quickly followed for him. He was very fortunate to be given the use of his Grandfather’s Junk rigged 22ft. Newbridge Venturer bilge keel yacht to use when he was only thirteen.

Continuing sailing keelboats he bought his first Flying Fifteen when he was sixteen. He grabbed at every opportunity to go yacht cruising around the West Coast of Scotland and became more interested in dinghy racing at his club with a 505. The racing bug had grown now, and he competed with a Squib at the Royal Tay Yacht Club in the UK and European Championships.

Angus first came to Cumbrae at seventeen taking his first RYA course (Level 2 Powerboat). Deciding that a career in teaching sport might be for him, he began studying for an HND in sports coaching at Edinburgh Telford College. While doing this course he also taught swimming and life saving. This gave him the opportunity to compete in the World Life Saving Championships in both South Africa and New Zealand. In Durban he finished in 6th place in the initiative test (responding to incident and emergency).

After college Angus started coaching dinghy sailing in Australia at Geelong Grammar School, which prompted him to gain his dinghy instructor's ticket. On his return to the UK he became a windsurfing instructor and kayak level two coach, as well as passing his Yachtmaster Offshore certificate. His enthusiasm and enjoyment of working with people outdoors, especially on the water, made him decide on a career in watersports.

Before joining Cumbrae, Angus worked at the British Kiel Yacht Club in Germany for four and a half years, providing adventurous training for the joint services. This also allowed him to continue with his own training to become a Yachtmaster Instructor. He co-skippered the 57ft. yacht ‘Flamingo’, one of the WW II 100 square metre windfall boats built in 1935 for ’36 Hitler Olympics’, which the British forces took as reparation after the war. It was with this yacht that Angus was lucky enough to take part in the Baltic Sprint Cup while he was in Germany.
Angus is a knowledgeable instructor who has now been at Cumbrae for a number of years, and is respected member of the instructor team.

Angus’s has come up with some interesting top tips when using bigger boats either sail or power.

Many couples enjoy sailing together so make sure you and your partner are aware of what to do in the event that either of you fall overboard. Both need to know how to use the lifebuoy/dan buoy man over board kit, VHF equipment, how to drop sails as required and start the engine. Practice this MoB drill with just the two of you out there!

Label halyard ropes etc. or any complicated engine starting procedure as a memory aid. Some handy device to bring the casualty back on board the boat must also be thought about.

Angus recommends that if you’re approaching shallow water you ensure your speed is less than the depth. So if the depth is two metres make your boat speed two knots or less. That way, if you do touch the bottom, you touch gently! Remembering to set the shallow depth alarm on the echo sounder for five metres can act as a reminder of any potential depth problems.

When coming into harbour to tie up in the rain, ask your crew to take their hoods down so that they can hear you, rather than having to shout.

Finally, don’t run out of tea or coffee if you want a happy skipper!

Angus’s favourite piece of clothing kit – His mid layers as they keep him warm and dry.
What Angus adds to Cumbrae – He has good all round knowledge of all the equipment and gives the best advice on how to use it. 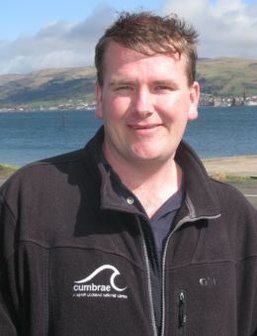